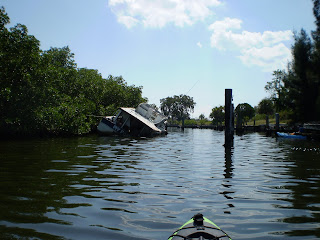 Yesterday, Keith, in his search for a new kayak, took me down to Sweetwater Kayaks to test drive a few Malibu's. We took our fishing stuff just in case he didn't buy one so we could fish while we were out near Gandy. Problem was, they only had one for him to check out and no Mini-X in stock.

After his test run, we unloaded our gear and headed out to fish the always popular "Boat Graveyard" which is a mangrove area with a collection of dilapidated and sunk boats and docks, abandoned and left to rot. Oyster bars dot this habitat as well. 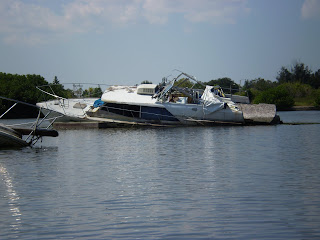 We also wanted to test out a few new home made stake out poles, which were 8 ft long and made out of green plastic gardening poles with a PVC t at the end. These initially worked well and fit through the scupper holes nicely but wouldn't hold up and kept cracking and bending under the stress of leaning. The great thing about having a longer stake out pole like that is giving me the ability to have something to hold on to while standing up in the kayak, as well as having something to pole the kayak along. We think that inserting these green gardening stakes inside a length of PVC will add a bit more toughness and support.

We paddled through the honeycomb of wrecked and sunk boats, docks, oyster bars and mangroves. There were numerous "fishy" looking areas along the deep mangrove shoreline that didn't seem to be holding fish on the dropping tide. Finger mullet and pinfish were plentiful along the mangrove prop roots. 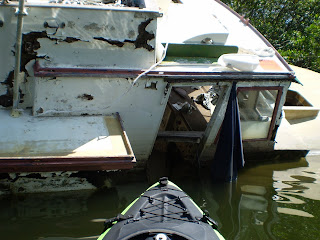 We found a tidal creek with a depression at the mouth dotted with piles of concrete slabs and caught a few dink trout but, beside that, all was quiet. 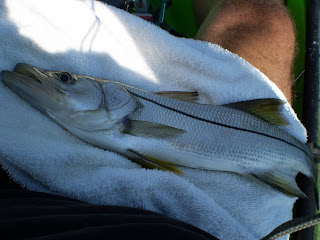 I cast a DOA Shrimp into the mangroves next to a concrete pile and it immediately got hammered by an 18 inch snook. My drag was set fairly loose, so he initially dragged me into the bushes, but the 30 lb leader and 20 lb Power Pro held. He was a bit on the skinny side but swam off after a long reviving. 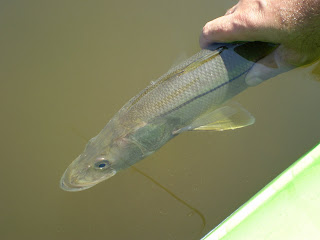 None of his buddies that we spotted in the area were interested in playing so we called it a day....awesome weather and light breeze made it a great scouting trip.
Posted by Rob at 10/03/2010 09:07:00 AM